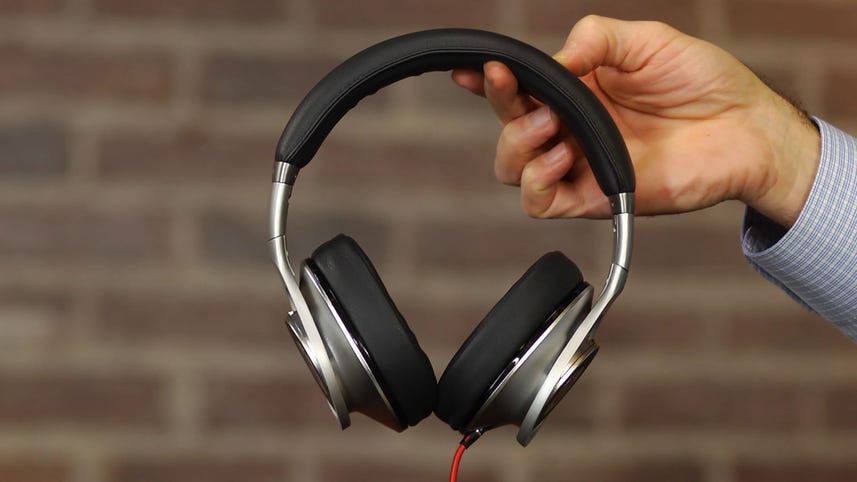 You probably don’t associate the  by Dr. Dre brand with corporate chic, but that’s the vibe the company is going for with its noise-

The Beats by Dr. Dr have an appealing design, strong features, and good sound, but they don’t quite measure up to the Bose QuietComfort 15 noise-canceling headphones.

In its marketing pitch, Beats says the Executives are designed to “take you from [the] boardroom to the tarmac and everywhere in between. These headphones deliver the legendary Beats sound now in a refined premium package that’s easier than ever to take on the road.”

In other words, it’s trying to dip into the same crowd that Bose runs with — and why not, those are the guys and gals who can afford to pay $300 for a pair of headphones.

So, are the  as good as the Bose Quiet Comfort 15 headphones, which retail for the same price? No, not quite; but they’re still quite decent noise-canceling headphones, with a sleek look, good build quality, and a comfortable fit.

Design
In the past, a lot of people complained that Beats headphones just weren’t that sturdy and didn’t hold up that well over time. I’ve only tested this pair for a week, so I can’t comment on how well they’ll do over several months, but they seem much better built than previous Beats models and have a good sturdy feel to them, with some parts made out of metal instead of plastic, thick wires, an L-shaped plug, and a nicely padded headband and earcups. They have a slightly more refined, understated look than some of the other Beats models.

While one of the hinges squeaked a little — a spritz of WD-40 remedied that — I liked the design and found the headphones very comfortable, though they are somewhat hefty (the adjectives sturdy and hefty often seem to go together).

The have a double hinge and fold flat and up slightly to fit into a fairly compact case that’s about the same size as the case for the Bose QC15s. A diagram inside the case informs you how they should be folded to fit properly. However, there’s no pocket inside the case for storing an extra set of batteries or the two-pronged adapter.

In a nice touch, the door to the battery compartment in the left earcup adheres magnetically and is easy to get on and off. Two AAA batteries are required to power the noise cancellation; the switch is at the top of the right earcup. Alas, like with Bose’s QuietComfort headphones, you have to activate the noise-canceling to get any sound out of the headphones — so if the batteries die, you can’t listen to anything.

Features
Beyond the active noise cancellation, the headphones ship with a two-pronged airline adapter and two different headphone cables (yes, the cables are detachable). One is a standard straight cord while the other has an Apple-friendly inline remote with a microphone for making cell phone calls.

Some of the inline remote’s features, such as volume control and skip track forward and back, won’t work with Android and BlackBerry devices. But you can answer and end calls, as well as pause and play your music. As the manual says, remote functionality will “vary by device.” The microphone did work well in my test calls.

Performance
In reviewing noise-canceling headphones, there are two parts to the performance section. First, there’s the noise cancellation, and I’d rate the Beats as OK but not great; it’s not up to the level of the Bose QC15s’ noise cancellation.

The biggest issue: while the noise-canceling circuitry muffles exterior sound well, it creates a very faint but audible hiss. You won’t hear it when you’re playing a typical tune at a moderate volume, but it surfaces during quieter moments on tracks (or when the music’s off).

As for sound quality, I thought the Beats were quite good for a noise-canceling model. They deliver plenty of good, meaty bass but don’t over-accentuate it like other Beats models. In that regard, they have a slightly flatter, more balanced sound, though I wouldn’t call them warm; they still have a somewhat aggressive profile, just not as aggressive as your typical Beats headphones. This may be an effort by Beats to appeal to a more “business-class” customer who listens to a wider range of music and requires more versatile headphones.

With active noise-canceling, you do lose some clarity, and while these offer good detail, they’re just not incredibly clean-sounding. The Bose QC15 earphones aren’t an audiophile’s dream, but they do offer a cleaner, smoother sound that I preferred. I also found the lighter and more comfortable.

Tastes vary, of course, but the long and short of it is that Beats hasn’t beaten Bose. At least not in the performance department.

Conclusion
I liked the Beats Executive headphones. Overall, they’re well-designed, fit comfortably, and have a sturdy feel and slick look. I also thought they sounded good for a noise-canceling model. If someone were to give them to me as a gift, I’d use them.AIRPORT

However, if I had $300 to spend on a pair of noise-canceling headphones, I’d probably lean toward the Bose QC15s. You also have the Monster Inspiration headphones at this price point — I like the Inspirations’ sound slightly better but the Beats Executives are slightly more comfortable and fold flat — as well as the Audio-Technica ATH-ANC9 headphones, which are also very good, but arguably not quite as good as the Bose QC15s.

In the end, the if swanky noise-canceling headphones are what you’re after. But you should ideally try them alongside a pair of Bose QuietComfort 15s before you buy them.